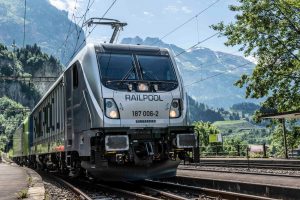 Switzerland and especially the Swiss Alps are known for their picturesque railway lines, which are among the most beautiful in the world. We are pleased to announce that at the turn of the year 2020/2021, 9 of our state-of-the-art last-mile and multi-system locomotives will hit the rails in Switzerland for our customer TX Logistik.

“With TX Logistik, we have a reliable and long-standing partner at our side, with whom we have already been working for 10 years. We have currently leased an 18 locomotive fleet to TX Logistik, which is on the road in 11 countries from Scandinavia to Italy and Romania. We are very pleased about the new order and look forward to many more great years of collaboration.”, says Volkmar Günther, Sales Manager of RAILPOOL GMBH.

“The modernisation of the fleet is an important prerequisite for future transports on the Swiss corridor”, emphasises Albert Bastius, COO of TX Logistik. “We see good growth potential here, not least due to the infrastructure improvements on this corridor. The handling capacities of the new terminals that Mercitalia is currently building in northern Italy also make new connections through Switzerland attractive. We look forward to working together.”

TX Logistik was founded in 1999 as a private rail transport company and offers an efficient European network with connections in eleven countries. The company has subsidiaries in Switzerland, Austria, Denmark and Sweden as well as a local presence in Italy. In the Intermodal and Rail Freight business units, TX Logistik develops comprehensive rail solutions for continental and maritime transports as well as tailor-made concepts for conventional freight. With 572 employees and 9.4 billion tonne-kilometres driven, the company generated an annual turnover of €252 million in 2019. Since January 2017, TX Logistik has been wholly owned by Mercitalia Logistics S.p.A., a subsidiary of Ferrovie dello Stato Italiane.

RAILPOOL is one of the leading rail vehicle rental companies with genuine expertise for full service from a single source. The company was founded in Munich in 2008 and is now active in 16 European countries.
With over 400 electric locomotives and 148 passenger vehicles (with a total investment of €1.2 billion), RAILPOOL is one of the largest providers in Europe. The Railpool fleet covers 70,000,000 kilometres every year and makes an important contribution to the modal shift to rail, saving 285,600 tonnes of CO2 per year compared to freight transport by road. RAILPOOL has its own warehouse with over 78,935 items from 2,700 different spare parts and components.

WE ARE HERE FOR YOU
IMMEDIATELY AND IN PERSON